Streptococcus agalactiae belongs to serological group B streptococcal (GBS) due to the antigen characteristics. Morphologically it is gram- positive, round -bearing chains in bacteria. On sheep blood nutrient media containing form around the colonies haemolysis (beta- hemolysis). Hemolysis is but usually less pronounced than that of group A streptococci. 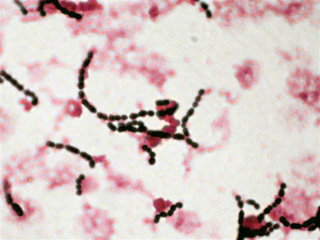 Streptococcus agalactiae is the main cause of sepsis in neonates and young infants. In addition, GBS cause in adults with weakened immune septicemia and other infections.

The neonatal sepsis (with or without meningitis) occurs with an incidence of 1/ 1000 live births. The infection may be either in the first three days of life (early onset type, > 90 %) or occur later (late onset type, max. 10%). In the early form of the disease, the pathogen during parturition are transferred from the mother to the child while in the late form of a transfer can take place as well as from the environment by both the mother her. The incubation period is difficult to define in perinatal infections because the infection is often preceded by an indefinite period of colonization.

GBS belong to the normal flora of the genital tract. 5-20 % of women have vaginal colonization. An additional habitat provides the rectum dar. For the adherence of bacteria to human epithelial cells specific fibrinogen -binding proteins are responsible. The colonization of the maternal genital tract alone can not be considered a risk to the baby, but it must be complemented by other risk factors such as premature rupture of membranes or low birth weight. A major risk factor seems to be the absence of antibodies against the polysaccharide antigen.

The neonatal sepsis due to GBS is because of the serious prognosis of the disease with a combination of penicillin G [(PENICILLIN GRUNENTHAL others) 300,000 IU / kg bw / day in 4-6 divided doses ] or ampicillin [(BINOTAL others) 200 mg / kg bw / day in 3 divided doses ] with an aminoglycoside [eg As gentamicin (Refobacin etc.) ] for at least 5 days treated (pronounced synergism between penicillins and aminoglycosides). Cephalosporins are an alternative to the penicillins. Isolates with reduced susceptibility to b-lactam antibiotics or high levels of resistance to gentamicin come in Germany practically inexistent. The natural sensitivity of B-streptococci to penicillins but by a factor of 10 lower than that of group A streptococci. The percentage of isolates with resistance to erythromycin (Erythrocin, etc.) in all group B streptococci is given as approximately 10%.

In the detection of a B streptococcal colonization between the 35th and 37th week of pregnancy is suggested chemoprophylaxis at the time of birth. In question penicillin G are (initially 5 million IU iv and then 2.5 million IU iv every 4 hours until delivery) or ampicillin (2 g IV at the beginning and then 1 g IV every 4 hours until delivery). In penicillin allergy can clindamycin [(Sobelin others) 900 mg iv ] every 8 hours - not expressly approved in Germany with this indication) or erythromycin (500 mg administered intravenously every 6 hours) until delivery. With the use of erythromycin (about 10% in this country) should previously a sensitivity test can be performed to prevent a failure of prophylaxis of infection due to the resistance situation. See www.gmedication.com for medications.

The diagnosis of GBS disease is usually carried out by cultivation of suitable test material - in neonatal disease from blood and / or cerebrospinal fluid - and subsequent serological grouping. If there is clinical suspicion of sepsis and the detection of multiple skin swabs or the body openings of the child can give an indication of the etiology. Because of the often uncharacteristic symptoms and the most rapid deterioration of the general condition of the cultural methods primarily to confirm the suspected diagnosis are useful. Immunological detection of B streptococcal antigen in urine or cerebrospinal fluid (latex test) has disappointed, according to the German Society for Paediatric Infectious Diseases due to lack of specificity for practical clinical use.